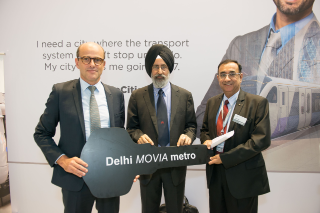 The new trains will increase the number of DMRC’s existing fleet of BOMBARDIER MOVIA metros from 614 to 776 and make it one of the largest Bombardier metro fleets in the world.

HS Anand said, “These new cars are being procured by Delhi Metro for services on its presently operational red, blue and yellow lines. These cars will be put into service in a phased manner after the mandatory tests and trials. The addition of these cars will go a long way in providing safe and comfortable travel to our valued commuters.”

Benoît Cattin-Martel commented, “The high degree of localisation executed in the project at Bombardier’s Savli and Maneja sites fulfils the requirements of the Indian government’s ‘Make in India’ campaign and Delhi Metro’s indigenous procurement plan that encourages local manufacturing.”

He added, “Our energy efficient trains have helped the city of Delhi improve mobility and manage pollution levels as well as provided effective public transport during the 2010 Commonwealth Games. Our vehicles have also contributed to Delhi Metro receiving UN carbon credits, a world’s first for a metro project.”

The modern, high-capacity MOVIA metro vehicles integrate some of the world’s most advanced mobility technologies specifically adapted to suit Delhi’s existing infrastructure. In its six-car configuration, these new vehicles will accommodate 1,740 passengers. Once configured into eight-car sets, the trains will carry as many as 2,400 passengers providing a much needed capacity increase on two of Delhi’s main metro lines serving more than 50% of Delhi Metro’s average current ridership of around three million passengers a day.

From Savli, Bombardier is delivering high-quality trains for India as well as for important export markets, as demonstrated by manufacturing the new commuter trains for Queensland and metro cars for Delhi. In addition to ‘Make in India’, Bombardier also supports the Indian government’s vision on ‘Skill India’ with locally-grown talent now delivering projects for both India and export, as well as supporting the ‘Clean India Movement’ by regularly arranging clean-up drives in Vadodara.

Bombardier Transportation has approximately 2,000 employees in India. It operates a railway vehicle manufacturing site and bogie assembly hall in Savli near Vadodara, Gujarat. This is in addition to a propulsion systems manufacturing facility at Maneja, a Rail Control Solutions Centre for project delivery and product engineering and an Information Services India hub near Gurgaon, Delhi NCR and an Engineering Centre in Hyderabad.

Bombardier is headquartered in Montréal, Canada. Our shares are traded on the Toronto Stock Exchange (BBD) and we are listed on the Dow Jones Sustainability North America Index. In the fiscal year ended December 31, 2015, we posted revenues of $18.2 billion. News and information are available at bombardier.com or follow us on Twitter @Bombardier.

Bombardier, MOVIA and The Evolution of Mobility are trademarks of Bombardier Inc. or its subsidiaries.

You can also contact one of our worldwide contacts for specific press inquiries.