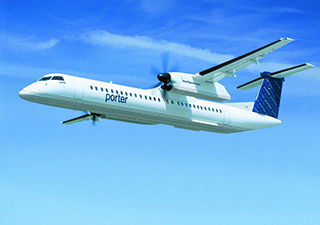 Porter’s home base at Billy Bishop Toronto City Airport is known as one of the world’s best urban airports. It is located within three kilometers of the city’s central business and entertainment districts. Approximately 2.7 million passengers used the airport in 2016.

“The Bombardier Q400 aircraft represents the fine craftsmanship that has been the backbone of the aerospace industry in Canada for many years,” said Robert Deluce, President and CEO, Porter Airlines. “As Bombardier prepares to celebrate its 75th anniversary this year, the Q400 aircraft’s performance, environmental credentials and passenger appeal continue representing hallmarks of our customer experience. These attributes have supported Porter’s network growth to 23 destinations in more than a decade of operation.”

“We are honoured that Porter continues to credit the Q400 aircraft with providing the operating efficiency, speed and low noise levels that have helped the airline grow to become one of the best regional airlines in North America. Bombardier is delighted that the Q400 aircraft has contributed to that success as we continue to see a trend for more capable turboprop aircraft worldwide,” said Fred Cromer, President, Bombardier Commercial Aircraft.

Thanks to its combination of turboprop attributes, jet-like features, industry-leading passenger experience and environmental footprint, the Q400 aircraft is exceptionally versatile and can be adapted to a variety of business models. By offering a 30 per cent reduction in fuel burn over the jets it often replaces, the Q400 aircraft radically reduces carbon emissions and increases cost efficiency. Its high-speed cruise — 160 km/h faster than conventional turboprops — places the aircraft’s flight time within minutes of jet schedules, at the same seat cost as larger single-aisle jets. Its large propellers operate at a lower RPM, generating more power with less noise and making it a friendly option for city centres.

The Q400 aircraft family includes over 60 owners and operators in almost 40 countries. The worldwide fleet has logged more than 6.9 million flight hours and has transported more than 429 million passengers. Long recognized as a high-value asset by operators, the Q400 aircraft is now also attracting growing interest from the leasing community.

Bombardier has recorded firm orders for a total of 572 Q400 aircraft.

Porter Airlines has revolutionized short-haul flying with a warm and effortless approach to hospitality, restoring glamour and refinement to air travel. Porter is an Official 4 Star Airline® in the World Airline Star Rating® and also rated as Best Regional Airline in North America by Skytrax.

Notes to Editors
Images of Porter Airlines Q400 aircraft are posted with this news release at www.bombardier.com.

Bombardier, Q400 and Q Series are trademarks of Bombardier Inc. or its subsidiaries.