The CS100 airliner carrying 100 passengers, along with six Bombardier crew members, was operated by Bombardier’s crew and featured the livery of launch customer Swiss International Air Lines (“SWISS”). With the passengers, their luggage and fuel on board, Bombardier confirmed to passengers that its calculations indicated the aircraft could have flown direct from Dublin to Montréal. The one hour and 50 minutes ride from Dublin to Zurich consumed 20 per cent less fuel than competing single-aisle aircraft currently flying that route.

“It was a pleasure to welcome our fellow Star Alliance Chief Executive Board members to Zurich in this special year, having flown on a very special aircraft – the Bombardier C Series – for which SWISS is the launch customer,” said Thomas Klühr, Chief Executive Officer, SWISS. “We are really looking forward to welcoming the CS100 into our fleet when we take delivery in a few weeks.”

“The IATA conference was a wonderful opportunity to showcase the C Series aircraft to leaders of the world’s major airlines,” said Fred Cromer, President, Bombardier Commercial Aircraft. “Along with our friends at Star Alliance we were able to offer their member airlines a unique and exclusive opportunity to fly aboard the CS100 aircraft from Dublin to Zurich.

“As we approach first delivery and entry-into-service with launch operator SWISS, showcasing the CS100 aircraft to Star Alliance members and media provided them with first-hand experience of the C Series aircraft’s flight deck and cabin in operation. The quiet, steep take-off and climb out to 37,000 feet (11,278 metres) impressed us all and the feedback has been overwhelmingly positive and complimentary – all in anticipation of the aircraft entering commercial service this summer. Our business case for the C Series aircraft is coming to fruition and we are confident that our strategic plan is on track,” added Mr. Cromer.

About C Series Aircraft
The C Series family of aircraft, representing the fusion of performance and technology, is a 100 per cent all-new design that offers operators up to US $13 million extra value per aircraft.

By focusing on the 100- to 150-seat market segment, Bombardier has designed the C Series aircraft to deliver unparalleled economic advantage to operators and to open up new opportunities for single-aisle aircraft operations.

In addition to delivering best-in-class economics with the C Series aircraft, Bombardier has placed considerable emphasis on cabin design to ensure a superior passenger experience. The aircraft offers 19-inch-wide seats that set a new industry standard, large overhead bins that accommodate a carry-on bag for each passenger, and the largest windows in the single-aisle market. Together these attributes create a widebody feel that offers passengers an unparalleled level of comfort.

The game-changing C Series aircraft offers the best-in-class environmental scorecard and is the quietest in-production commercial jet in its class.  With a combination of outstanding short-field capability and a maximum range of up to 3,300 NM (6,112 km), the C Series aircraft is uniquely positioned for varied types of operations.

About Star Alliance
Star Alliance is a global airline network which was established on May 14th, 1997 by five airlines, Air Canada, Lufthansa, Scandinavian Airlines, THAI and United.

Together more than 430,000 employees serve over 640 million passengers a year. With a modern combined fleet of more than 4,600 aircraft, the Star Alliance member airlines offer 18,500 daily flights to 1,330 airports in 192 countries.

Bombardier is headquartered in Montréal, Canada. Our shares are traded on the Toronto Stock Exchange (BBD) and we are listed on the Dow Jones Sustainability North America Index. In the fiscal year ended December 31, 2015, we posted revenues of $18.2 billion. News and information are available at bombardier.com or follow us on Twitter @Bombardier

Notes to Editors
Photos are posted with this press release at www.bombardier.com.

For more information on the C Series aircraft, visithttp://news.commercialaircraft.bombardier.com.

Bombardier, C Series, CS100 and The Evolution of Mobility are trademarks of Bombardier Inc. or its subsidiaries. 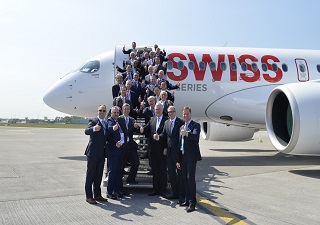