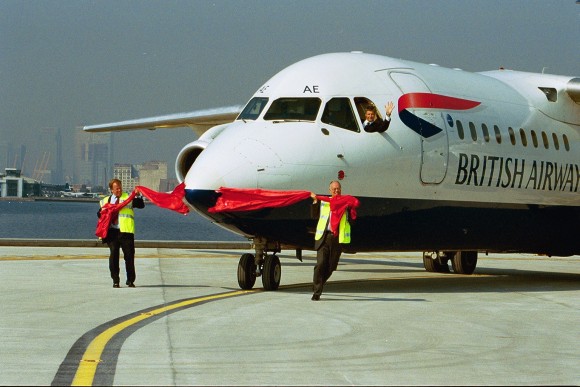 BA CityFlyer, the wholly owned British Airways subsidiary, with its headquarters in Manchester, marks its 10th anniversary with good cause to celebrate – the number of customers using its services has more than quadrupled and aircraft numbers have doubled in the past 10 years.

BA CityFlyer is firmly established at London City Airport, which celebrates its 30th birthday this year, as the biggest operator in terms of routes, customers and aircraft movements.

Adam Carson, BA CityFlyer’s managing director said: “The 10-year anniversary is a significant milestone for us. Initially a business-based airline we listened to what our customers told us and moved into leisure flying as well, reaching a whole new market but at the same time expanding our core business network.

“The key to our success is our schedule, offering our customers well-timed and well-priced flights and plenty of choice to destinations they want to fly to.  London City and Edinburgh airports have both been key to our operation, with aircraft and crews based there, but adding another London airport, Stansted, to our network was a major expansion ahead of new regional flying from Manchester, Birmingham and Bristol from May this year.”

BA CityFlyer was launched on March 5, 2007 with 144 flights a week, increasing to 250 flights to six UK and European destinations with a month. This summer it will fly from London City and regional airports to a record 54 destinations in the UK and Europe.

The airline is expanding its regional operation to fly from Manchester, Birmingham and Bristol airports as well as increasing schedules at Stansted, Edinburgh and Dublin.

Declan Collier, CEO of London City Airport, said: “Over the last decade, BA CityFlyer has grown its fleet considerably and become our largest airline customer, offering great service and a growing route network that continues to be widely praised by our passengers.

“As London City Airport celebrates its 30th anniversary year in 2017, it’s fitting that we recognise BA CityFlyer’s 10 years at the airport, and thank the dedicated team that have helped contribute to a phase of record-breaking passenger growth.”

In 2007 BA CityFlyer employed 278 staff, today it has more than 500 employees, including the management team based at its Manchester headquarters.

Underlining its business focus at London City, British Airways offered customers a schedule that enabled them to do a full business day in some of Europe’s major cities with a same-day return option.

More recently the airline has expanded its leisure flying, serving popular European sunspots and this summer almost two million seats will be on sale from London City.

Some of BA CityFlyer’s destinations and low prices include each way fares to Milan from London City and Stansted from £45, Manchester to Alicante, Ibiza, Nice and Palma  from £49 and Bristol and Birmingham to Palma and Ibiza from £49.