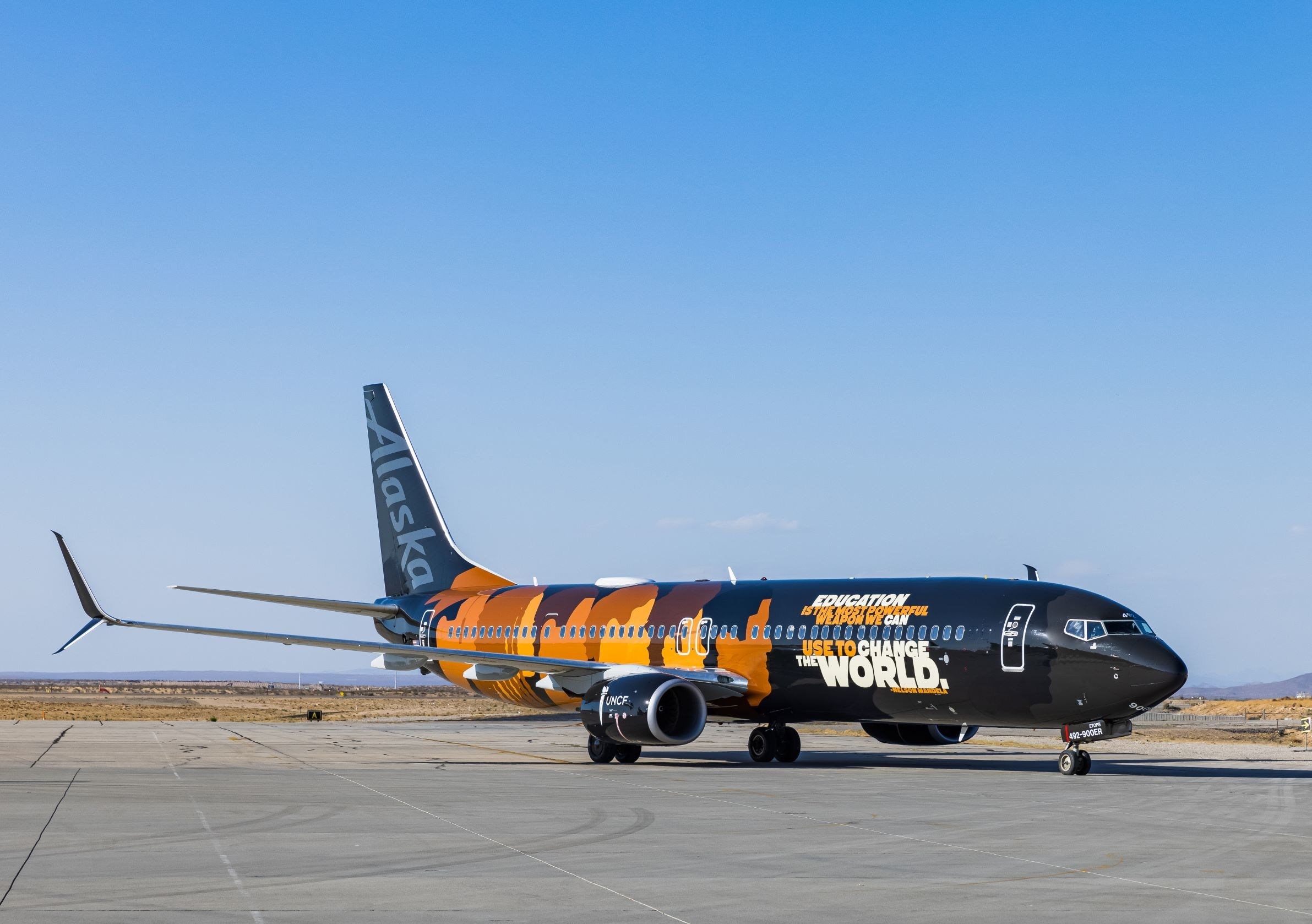 Aircraft serves as embodiment of Alaska’s values, takes conversation around education, equity and belonging to the skies, and is an extension of a 15-year partnership between Alaska and UNCF

SEATTLE, WASHINGTON, 2021-Apr-30 — /Travel PR News/ — Alaska Airlines’ “Our Commitment” aircraft took to the skies in partnership with UNCF (United Negro College Fund), a symbol of the airline’s promise to create a place where everyone sees themselves and belongs. Designed with Alaska’s Air Group Black Employees, Allies and Advocates (ABEA) group to illustrate the airline’s belief in education as the great equalizer and as a critical component of creating sustainable racial equity, the aircraft features 14 profiles of the next generation of leaders: the children, grandchildren and mentees of Alaska’s employees. The aircraft made its inaugural flight from Seattle to Washington D.C., on Tuesday, April 27.

“As a company, we know we are not yet where we need to be when it comes to diversity, but we are inspired and guided by our value to do the right thing. With this aircraft, we are doing the right thing by amplifying the conversation around education, equity and belonging and taking it to the skies,” said Ben Minicucci, Alaska Airlines CEO. “This aircraft will continue to be an inspiration for us on the journey.”

The aircraft embodies Alaska’s long-term partnership with UNCF, the largest scholarship provider for students of color and an organization dedicated to enabling under-represented students to become highly-qualified college graduates. “Our Commitment” will fly throughout Alaska’s network year-round spreading the word about UNCF and inspiring conversation around racial equity and the transformative impact of education in the lives of young people.

Dr. Michael L. Lomax, president and CEO of UNCF said, “While small in number, our HBCUs are landmarks to our past and keys to our future. They enable us to keep a legacy—by their very existence. HBCUs are much more than schools. They are places where Black students can feel safe, welcomed, and embraced by the college community. Additionally, the nation’s HBCUs make up just 3% of America’s colleges and universities, yet they produce almost 20% of all African American graduates and 25% of African American graduates in the STEM fields of science, technology, engineering and mathematics—the critical industries of the future.”

This special paint theme builds on more than 15 years of partnership, including Alaska employees and guests donating millions of miles to UNCF to fly students to college tours and campuses at numerous Historically Black Colleges & Universities (HBCUs). Alaska has committed to donating an additional 10 million miles over the course of the program and has also established a scholarship fund to help overcome the financial obstacles of getting a college education.

“As the only Congresswoman to graduate from Clark Atlanta University, I know firsthand how crucial a world-class education from an HBCU is to opening up pathways for success. Educational equity is the key to building a brighter, more inclusive future for all students, including those who are traditionally underserved. I was truly honored to join the inaugural flight from Seattle-Tacoma Airport to DC to celebrate this historic partnership between Alaska Airlines and UNCF to promote education, equity, and diversity,” said Congresswoman Marilyn Strickland.

Read More: ‘I am my ancestors’ wildest dreams’: Albany State Alum shares the importance of HBCUs’ history, legacy and excellence

With “Our Commitment” aircraft, Alaska is honoring its value of doing the right thing, taking the conversation around education, equity and belonging to the skies. The aircraft features the profiles of 14 children, grandchildren and mentees of Alaska employees, along with two quotes that have inspired the airline’s diversity, equity and inclusion work.

“The time is always right to do what is right.” – Rev. Dr. Martin Luther King, Jr.

“Education is the most powerful weapon we can use to change the world.” – Nelson Mandela

The typography on the aircraft was created by Adé Hogue, a Chicago-based artist and designer, who found inspiration in Civil Rights Movement-era imagery. The profile design was created by an Alaska Airlines employee, whose child is one of the feature profiles.

The plane is a Boeing 737-900ER, and commercial service on the aircraft began April 27 with an inaugural flight to Washington, D.C. Onboard, guests can expect a special greeting when they board that explains the vision and purpose of the aircraft. They will also be able to learn more through a custom seatback card and digital resources featuring bios of the children on the aircraft, details on Alaska’s commitments to diversity and equity, and information on UNCF and HBCUs, including how to donate to the organization.

The 14 students featured on the plane represent the next generation of leaders, and the diverse voices and faces in the Alaska Airlines family. Some of the students include:

Some of these students shared their reflections on equity and education, in their own words:

“Equity is something a kid can’t control, yet could possibly affect their entire future,” says Shilah, 11th grade. “Every child deserves an equal opportunity to be able to succeed, and you only get that when you have an equal playing field.”

“Knowledge is power. If you have knowledge, you can change the world. You can make it a better place and that’s what we really need to do,” says Dominique, 11th grade.

Find information on all 14 students here.

Earlier in 2021, Alaska Airlines launched its new diversity, equity and inclusion commitments to increase BIPOC representation in leadership, continue to cultivate an inclusive culture and to lead publicly by supporting education on the path to equity.

“As a leader in aviation, we have a responsibility to use our platform and voice to spark much needed conversations around the need for greater diversity, equity and inclusion within our industry, and that starts from the top down,” Alaska Airlines CEO Ben Minicucci said. “Our greatest opportunity is to increase the diversity of our leadership levels to reflect the diversity of our broader employee population.”

UNCF (United Negro College Fund) is the nation’s largest and most effective minority education organization. To serve youth, the community and the nation, UNCF supports students’ education and development through scholarships and other programs, supports and strengthens its 37 member colleges and universities, and advocates for the importance of minority education and college readiness. UNCF institutions and other historically Black colleges and universities are highly effective, awarding nearly 20% of African American baccalaureate degrees. UNCF administers more than 400 programs, including scholarship, internship and fellowship, mentoring, summer enrichment, and curriculum and faculty development programs. Today, UNCF supports more than 60,000 students at over 1,100 colleges and universities across the country. Its logo features the UNCF torch of leadership in education and its widely recognized trademark, ‟A mind is a terrible thing to waste.”® Learn more at UNCF.org or for continuous updates and news, follow UNCF on Twitter at @UNCF.

Alaska Airlines and its regional partners serve more than 120 destinations across the United States and to Mexico, Canada and Costa Rica, providing essential air service for our guests along with moving crucial cargo shipments, such as food, medicine, mail and e-commerce deliveries. With hubs in Seattle; San Francisco; Los Angeles; Portland, Oregon; and Anchorage, the airline is known for low fares, award-winning customer service and sustainability efforts. With Alaska and its Global Partners, guests can earn and redeem miles on flights to more than 800 destinations worldwide. Learn about Alaska’s award-winning service at newsroom.alaskaair.com and blog.alaskaair.com. Alaska Airlines and Horizon Air are subsidiaries of Alaska Air Group (NYSE: ALK).