Johannesburg, South Africa, 2014-8-4 — /Travel PR News/ — The debut landing of the Airbus A350XWB on Saturday afternoon became even more symbolic when an Airports Company South Africa female Marshall Official was at the forefront of ushering the successful landing of the aircraft in celebration of Women’s Month.

Airbus announced today that during its visit to South Africa, the aircraft will carry out crucial high airfield performance and auto-landing trials at O.R. Tambo International Airport. The A350XWB which carries 369 passengers is the latest generation and newest long-haul jetliner by the European aircraft manufacturer to enter the market. It is the only all-new family of aircraft in the 300-400 seat category and will set a new standard of comfort and efficiency in the class.

Unathi Batyashe-Fillis, head of Corporate Affairs for Airports Company South Africa at O.R. Tambo International Airport said, “We are pleased to be selected as the first airport on the continent to host the latest addition to the Airbus family. The decision by Airbus to run test flights of their new jetliner at our facilities is testimony to the confidence the company has shown in our infrastructure and our capability as an airport management authority. Such flights are used to test compatibility of the aircraft with existing airport and air traffic management infrastructure, systems and processes.”

You may also be interested in:  Lufthansa receives its 11th Airbus A320neo

Five prototypes of this all-new aircraft have been built and are currently engaged in an intensive and comprehensive flight test and certification programme. During its visit to O.R. Tambo International Airport, the Airbus A350XWB is expected to perform 10 instrument landing approaches and auto-landings. O.R.Tambo International is widely renowned as one of the most challenging airfields to navigate due to its high altitude and its relatively high temperatures.

“The design and construction of O.R. Tambo International Airport’s easterly runway, which is used predominantly for landing aircraft, requires precise calibration of auto-landing flight control and radio altimeter software in order to provide an ideal environment to test the accuracy of the A350XWB’s auto-landing capability,” explained Batyashe-Fillis.

One of the innovative features of the new aircraft is the all-new Carbon Fibre Reinforced Plastic (CFRP) fuselage which results in lower fuel consumption and easier maintenance. The fuel consumption will be 25% lower compared to existing aircraft of similar size.

The A350XWB represents the increasingly closer collaboration between Airbus and its South African suppliers. Airbus collaborates with South Africa’s research and technology community and has launched and funded numerous research initiatives in cooperation with the Department of Trade & Industry’s National Aerospace Centre and the Department of Science & Technology, the Council of Scientific and Industrial Research (CSIR), various universities and specialised laboratories. A key objective for Airbus is to broaden its industrial network to include more public and private sector partners.

Every A350XWB has a direct positive impact on South African workers, the country’s skills base and its development in addition to growing South African exports of high-value manufactured goods. The aircraft’s wing and fuselage components are manufactured by Aerosud in Centurion while Cobham South Africa in Westlake, near Cape Town, manufactures satellite communication equipment for the A350XWB. Among these made-in-South Africa components are the advanced composites fuselage frame clips which consists of hundreds of these frame clips installed which secure the aircraft’s panels to its skeletal frame.

You may also be interested in:  Emirates presents its latest generation Airbus A380 at the Dubai Airshow

Editors’ Notes
Being 5,557 feet (1,694m) above sea level and being equipped with the necessary landing aids, O.R. Tambo International Airport is ideally suited for these tests.

The A350 will then depart to Sydney, Australia on Monday, 4th August. The A350 XWB World Tour began on July 24th and involves a series of tests on four different trips. It will visit 14 airports around the world and will end on August 13th

The A350XWB will be equipped with the powerful Rolls-Royce Trent XWB engines, which will deliver up to 97,000 lb. of thrust on take-off, which are the most powerful engines ever developed for an Airbus aircraft. Over 70-percent of the A350 XWB’s weight efficient airframe is made from advanced materials, combining 53-percent of composite structures with titanium and advanced alloys 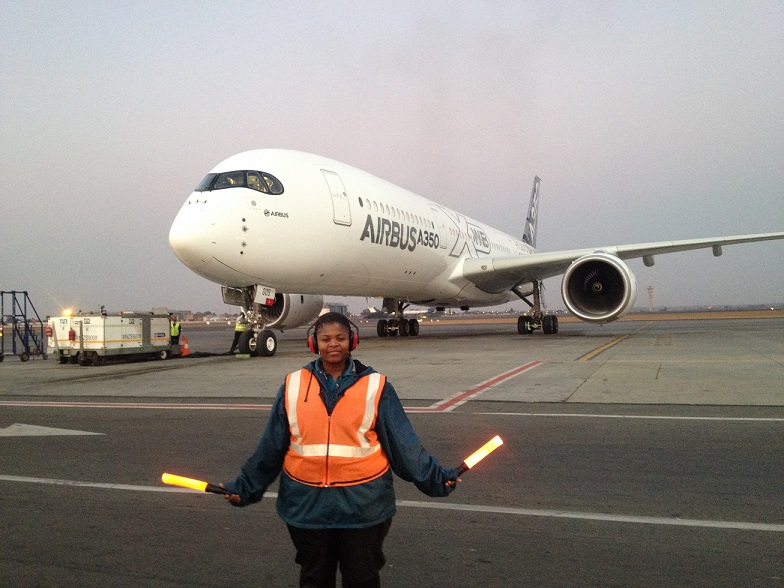