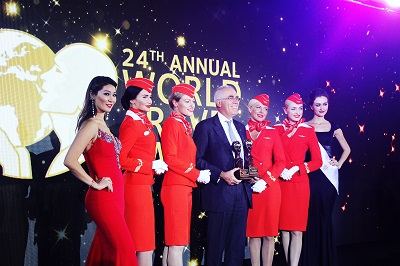 “We are proud that Aeroflot has been named as a leader of the European travel and tourism industry in two key categories,” said Giorgio Callegari, Aeroflot’s Deputy General Director for Strategy and Alliances. “This is the result of many years of work to return Aeroflot to the global aviation elite.

“Today, Aeroflot is a premium airline with a global reach and offering customer service of the highest international standards. Aeroflot Group ranks among the 20 largest airline groups by passenger traffic, and has a route network which provides access to many destinations in Russia of unique historic cultural heritage and outstanding natural beauty.”

The award was Aeroflot’s second prestigious accolade in the space of a week. Russia’s flagship carrier was also named a Five Star Global Airline in APEX’s Official Airline Ratings last week at the APEX EXPO Awards in Long Beach, California.

The World Travel Awards are awarded to leading names in the travel, tourism hotel and civil aviation industries. Since 1993 winners have been announced annually following an extensive selection process, in which hundreds of thousands of professionals and millions of travellers take part.

Known as the Oscars of the tourism industry, this year the World Travel Awards took place in Russia for the first time. St. Petersburg was chosen as the host city for the awards ceremony having been named Europe’s Leading Destination two years in a row (2015, 2016). Aeroflot was the only Russian airline to receive an award at the World Travel Awards 2017.

Last year Aeroflot became the first Russian airline to receive 4-Star Airline status from UK agency Skytrax, the authority on airline customer service. TripAdvisor users named Aeroflot the best airline in Europe, and best in the world for its Business Class service. In China, Aeroflot has been named the nation’s favourite foreign airline.

About Aeroflot
Aeroflot is Russia’s flagship carrier and a proud member of the SkyTeam global airline alliance. Aeroflot and its partners serve 1,074 destinations in 177 countries worldwide. In 2016, Aeroflot carried 29 million passengers (43.4 million passengers as Aeroflot Group including subsidiaries).

Aeroflot became the first Russian airline to be awarded Four Star Airline status by Skytrax in recognition of the high-quality of its customer service. In 2017, Aeroflot was named Best Airline in Eastern Europe for the sixth time at the Skytrax World Airline Awards.

In 2017, Aeroflot was named the most powerful brand in Russia and the world’s strongest airline brand by leading valuation and strategy consultancy Brand Finance. Aeroflot was also named Best Major Airline in Europe by TripAdvisor travellers and recognised as the Favourite International Airline in China at the Flyer Award Ceremony 2017.

Aeroflot operates one of the youngest fleets in the world with 202 aircraft. Aeroflot is based in Moscow, at Sheremetyevo International Airport.

The first Russian carrier to enter the IATA Operational Safety Audit (IOSA) register, renewing its registration for the seventh time in 2017, Aeroflot has successfully passed the IATA Safety Audit for Ground Operations (ISAGO) and is fully ISO 9001:2015, ISO 14001:2004 compliant.

Find out more at http://www.aeroflot.com/