Moscow, Russia, 2013-10-23— /travelprnews.com/ — Ten years ago Aeroflot received its first aircraft from the Airbus family — A320-A-319 which was named after the eminent Russian composer, pianist and conductor Sergei Prokofiev.

The A320 family airplanes meet all the requirements of security, reliability and passenger comfort. Aeroflot operates A320 aircraft on European and domestic routes. In terms of operational reliability and actual hours flown per aircraft, the company is among the world leaders. Cabins of this aircraft family are made in two-class configuration and designed to carry 116 (A319), 140 and 158 (A320), and 170 (A321) passengers.

Many aircraft of the A320 family which is the backbone of Aeroflot’s park are decorated with unique liveries and logos. You can find A320s with «Dobrolet» retro-livery, Winter Olympics mascots, Yekaterinburg World Expo 2020 Bid Committee logo. A jet from A-320 family became the Olympic Torch Relay aircraft and brought the Olympic flame from Greece to Moscow. Also, the Olympic Torch Relay team will travel to the northern regions of the country (from Kaliningrad to Vladivostok) and to the Caucasus on board of Aeroflot’s A320.

Today Aeroflot’s fleet counts 140 airplanes, most of them are of A319/320/321 family. All the Airbus aircraft are delivered to Aeroflot directly from the manufacturer. The average age of an A320 family aircraft is 5 years.

Aeroflot’s fleet is one of the youngest in Europe. By the end of 2012, Aeroflot reached the fourth place among European carriers in terms of aircraft deliveries, according to Airline Business rating.

Сelebrating its 90-th anniversary in 2013, Aeroflot is Russia’s flagship airline and the largest national air company. Proudly being a member of the SkyTeam global airline alliance, Aeroflot with its partnering members provides service to more than 1000 destinations in 178 countries. Aeroflot operates one of the most modern and youngest fleets in Europe counting 140 aircraft formed by Airbus, Boeing and Sukhoi airliners with an average airplane age between five and six years old. In 2012 Aeroflot carried 17.7 million passengers (27.5 million passengers as Aeroflot Group), continuously showing the best results in modern Russia’s history. In June 2013 Aeroflot was for the second time awarded by SKYTRAX as The Best Airline in Eastern Europe. Find more at www.aeroflot.com. 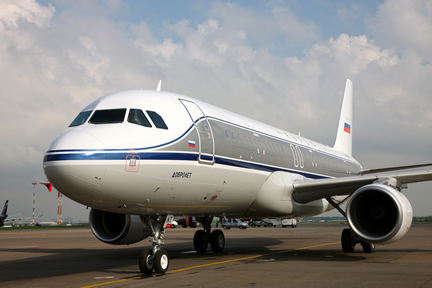