Bristol, UK, 2014-04-3 — /Travel PR News/ — Aer Lingus Regional today launched its new route from Bristol Airport to Shannon, in the heart of the West of Ireland. Passengers on the first flight from Shannon landed at 12.40pm at Bristol Airport today and were greeted by Aviation Director for Bristol Airport, Shaun Browne with local delicacies of scones with jam and cream.

Aer Lingus Regional will now operate one daily return flight to Shannon Airport and aims to fly up to 20,000 passengers on the route in the first year and 35,000 in 2015. The flights between Shannon and Bristol are on sale now. The launch of the new route is part of the airline’s growth strategy to fly up to two million passengers by 2016.

The Bristol-Shannon route is the airline’s latest package of measures to grow the airline as part of its ‘new beginning’ strategy which aims to return the company to profitability by the end of the year.

Stobart Air’s Chief Commercial Officer, Simon Fagan said that the addition of this new Bristol Shannon route is a vital step in the growth plan of Aer Arann:

You may also be interested in:  Bristol Airport welcomes the UK Government’s Jet Zero Strategy and its ambitious path to net zero aviation

‘We are delighted to announce the launch of the Bristol Shannon route. This new route connects the South West of England directly with Ireland’s rugged Western coastline. Furthermore it will enable easy access for people in Limerick and Galway to a key tourist hub of South East England.

‘Aer Lingus Regional is committed to providing our customers with easy, convenient and great value in regional connections. We have already enjoyed great success with our Bristol to Dublin and Cork routes and we hope to continue our Bristol success story with the addition of this vital route from Shannon.

‘It is great news for Bristol Airport and Aer Lingus Regional to be operating new services to Shannon this year. This announcement increases the schedule choice for passengers flying from Bristol on this route to one of Ireland’s key business hubs and tourist destinations. Equally we are looking forward to welcoming passengers from the West of Ireland to Bristol.’

The airline has overseen a 32% rise in Aer Lingus Regional passenger numbers in the 2013. Stobart Air operates over 664 flights per week across 27 routes in Ireland, the UK and France. 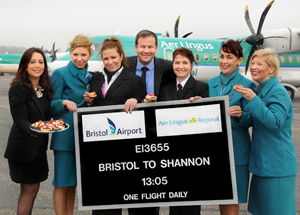