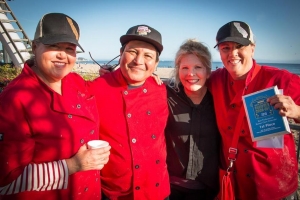 Parks & Recreation Director Mauro Garcia was pleased to hear the final numbers.  “The increase in the proceeds from this event will ensure more kids in our community can receive scholarships to our popular summer camps,” Garcia said.

Loulou’s Griddle in the Middle, a popular Monterey diner featured on Guy Fieri’s Diners, Drive-Ins and Dives, won the Best Professional Boston division. The restaurant has competed at the Boardwalk for the past four years, but this was their first win. Their secret?  “The main ingredient in our clam chowder is love,” said Loulou’s chef Gigi Davis.

Midgley’s Public House in Stockton was the judges’ choice for Best Professional Manhattan. Celebrity Chef Michael Midgley is best known for his appearances on Bravo TV’s Top Chef and Food Network’s Cut Throat Kitchen. Midgley has competed in the Santa Cruz Clam Chowder Cook-Off and the Santa Cruz Chili Cook-Off for the past few years, and typically places near the top.  “I’ve visited Santa Cruz since I was a kid. I started cooking clam chowder and chili to start a new family tradition,” Midgley said. “We’ve won 7 plaques in 4 years and plan to keep crushing it!”

In the Amateur division, Roben Webb’s team Clamalicious “Clams of Anarchy” was selected Best Amateur Boston by the judges and “People’s Choice” voters.  Michele Hartmangruber aka Dragonmama was a repeat winner for her Portuguese Red Manhattan.

The Boardwalk and Parks & Rec have worked together for 37 years to host the Santa Cruz Clam Chowder Cook-Off at the Boardwalk. This was the second year the cook-off was held over two days, with amateurs competing on Saturday, February 24 and Professionals on Sunday, February 25. More than 80 different clam chowders were served over the two-day event. Parks & Rec uses the money raised to fund a scholarship program that allows children from low-income families to participate in their programs.

“We’re really proud to work with Santa Cruz Parks & Rec on this very successful event,” said Boardwalk director Kris Reyes. “Everyone benefits when we team up to serve kids and families. Our major fundraisers like Drive for Schools with Capitola Auto Mall Dealer Group,  Bowl for Kid’s Sake with Big Brothers Big Sisters, Strike out Hunger with Second Harvest of Santa Cruz County, and working with Plantronics to co-sponsor 2 new homes for Habitat for Humanity’s “Live Oak” are all great examples of successful community partnerships.